Hormones are so much more interesting than what we’re taught in health class.  So we’ve created a guide to aaaall of the hormones. Here's everything you need to know about estrogen, progesterone, androgens, progestins, synthetic estrogen, and sex hormone binding globulin (SHBG).

Progesterone is the major hormone in a class of hormones called progestogens. Progestogens are sex hormones (like estrogens and androgens), meaning that they impact sexual development during puberty and are involved in reproduction.

Learning the importance of progesterone and how it affects your body through different life stages could allow you make sense of symptoms associated with your menstrual cycle, know when something is wrong, help you have a healthy pregnancy, or choose the best type of birth control for you. This understanding can help you advocate for yourself with your healthcare provider and make the best choices for your health.

Hormones are small molecules that are produced by glands and travel throughout the bloodstream, until they reach an organ whose cells have the particular receptors for that hormone. Progesterone targets and affects the uterus, vagina, cervix, breasts, and testes, as well as the brain, blood vessels, and bones (1,2).

Your body uses cholesterol as the building block to make progesterone. Progesterone is produced mainly in the ovaries by the corpus luteum (3), which is the area that develops after ovulation occurs and the follicle around the egg collapses. Some progesterone is also produced by the adrenal glands, which sit on top of the kidneys. During pregnancy the placenta produces progesterone (4).

What does progesterone do to the body?

How does progesterone change during the menstrual cycle?

Prior to ovulation = lower progesterone

At the start of the menstrual cycle (during the period), progesterone levels are low and they remain low throughout the follicular phase (4,7).

How do I know if my progesterone levels are normal?

If your levels of progesterone aren’t normal, there are some signs and symptoms you may notice.

Progesterone may be low if ovulation is not occurring regularly (or at all), or if your body can not build enough progesterone.

Some signs and symptoms of low progesterone include:

Some conditions, such as elevated prolactin (a hormone that induces milk production), hypothyroidism, or polycystic ovary syndrome (PCOS), can cause infrequent or absent ovulation, which would lead to low progesterone levels (11). In these cases, the cause of the low progesterone should be diagnosed and treated.

Tracking your period in Clue can help you know whether your cycles are irregular.

The term luteal phase defect is used to describe a condition that occurs when the body does not produce enough natural progesterone to maintain the normal function of the endometrium and support the implantation and growth of an early pregnancy (12). You may also see it called luteal phase insufficiency. Diagnosing a luteal phase defect can be difficult and there’s no single agreed upon test for it. When there is no known cause for low progesterone, there are no clear guidelines about how and when to treat it. In general there is little available information about people who have low progesterone and are not trying to become pregnant.

Knowing the importance of progesterone in maintaining early pregnancy (13), it makes sense that low progesterone might be a cause for infertility or miscarriage. However, it is a subject of debate among researchers and healthcare providers whether or not luteal phase defect is a cause of infertility, along with how best to diagnose and treat it (12).

Elevated progesterone is uncommon, but it can be a sign of certain disorders such as:

What are “normal” levels of progesterone during different life stages?

Progesterone levels can vary from person-to-person, but also for the same person from cycle-to-cycle. Differences in laboratory procedures, population served by the laboratory, and testing technique can also impact results—so lab results should always be interpreted using the laboratory’s reference values (7).

But here’s an idea of how levels of progesterone compare across different life stages (18). You might want to bring this with you to any appointments to compare with your healthcare provider.

Progestins are synthetic hormones created from progesterone or testosterone that have progesterone-like effects (19). Progestins are used in all hormonal contraception (either alone or in combination with an estrogen) and some menopausal hormone therapy.

Because their chemical structure is slightly different from the body’s own progesterone, they’re not a perfect fit for progesterone receptors. Progestins may attach to more than just progesterone receptors in the body. They may also bind to receptors for androgens and estrogens, causing side effects associated with these hormones depending on whether the progestin activates or blocks the receptor (2).

For example, progestins that activate androgen receptors may lead to side effects like acne or hirsutism (excess hair) in some people, especially when birth control has low or no estrogen (10). Hormonal birth control (usually the pill) can also be used to treat acne and hirsutism (20,21). Not everyone’s response will be the same, but for some people the specific formulation and type of progestin will matter. 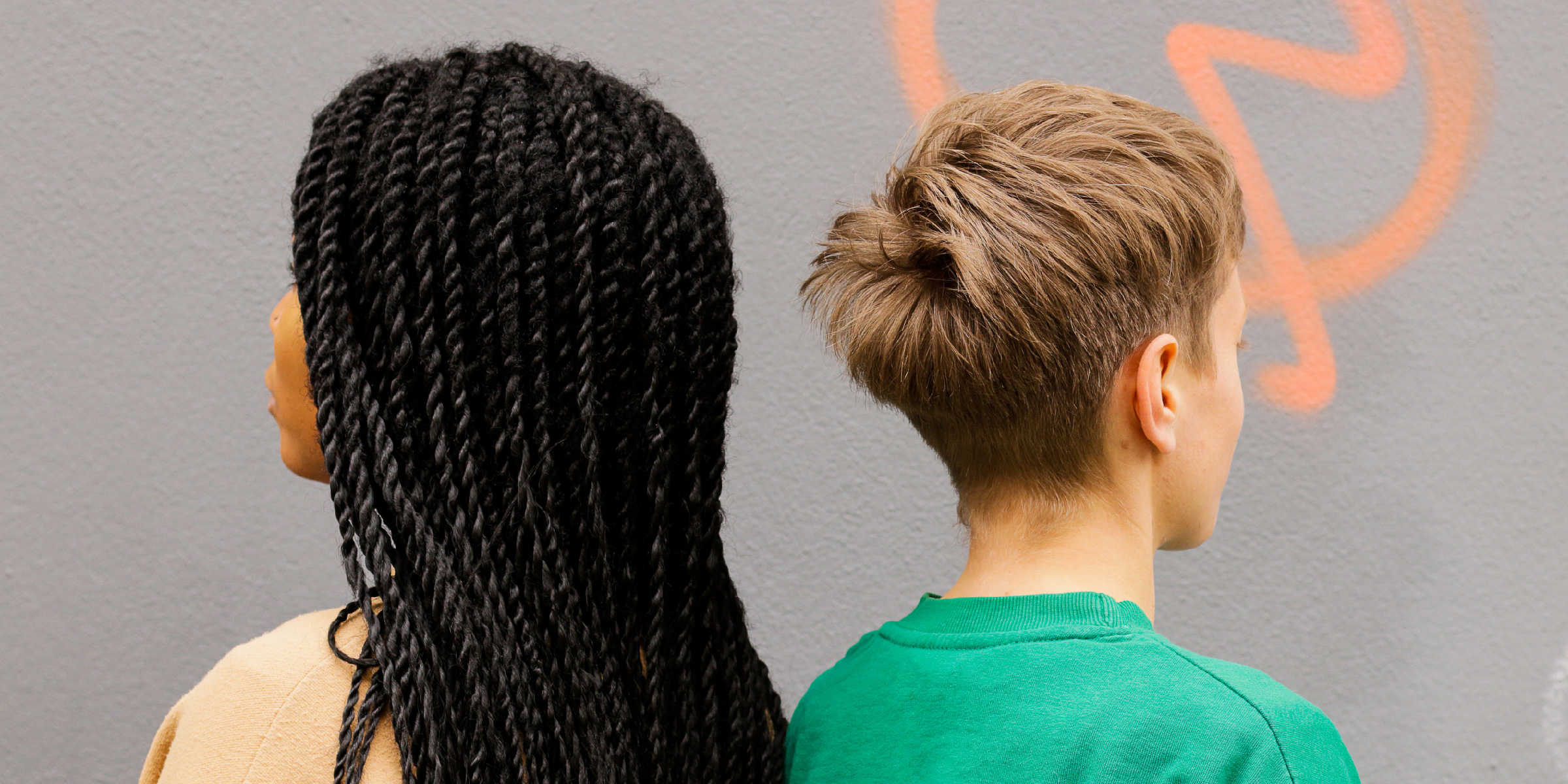 Birth control, your skin, and your hair

How different types of hormonal birth control may affect your skin and...

Sometimes the dose of progestin isn’t high enough or the attachment between the progestin and the progesterone receptors isn’t strong enough, causing bleeding or spotting while still taking active (hormone-containing) birth control pills or causing heavier periods (10). Sometimes a simple change in dose or type of birth control can improve these side effects. It may not always be the progestin causing the problem. In combined hormonal contraceptives, the estrogen dose may also play a role in certain side effects.

If you are having unwanted side effects that you think may be connected to your birth control, talk to your healthcare provider. Using Clue to track your cycle can help you see if there are patterns to what you’re experiencing and could help lead to a solution.

How does hormonal birth control affect the progesterone in my body?

Progesterone levels while taking hormonal birth control will depend on whether your method inhibits ovulation.

If you are not ovulating, then your progesterone levels will be low and flat (no peak).

Combined hormonal contraceptives—which include both a form of estrogen and a progestin— primarily prevent pregnancy by stopping ovulation. They also work by thickening cervical mucus (22).

The pill and progesterone

Progesterone is suppressed in people taking a variety of combined oral contraceptives (COCs) (various doses, progestin types, and regimens), indicating that ovulation does not typically occur with this method (23,24).

The patch and progesterone

In one study, progesterone levels for people using the birth control patch were lower than they were before starting the patch (25). The patch prevented ovulation in almost all cycles that it was used correctly.

The ring and progesterone

In a study of 21 contraceptive ring users, progesterone levels were consistently low (on average <0.63 ng/mL) because no ovulations occurred over the course of two months of use (24).

Ovulation may still occur on some progestin-only birth control methods. This means that progesterone levels will still rise and fall in the pattern that is typical of people not on hormonal birth control. Ovulation rates among this group vary because even though they all contain a progestin, they have different types, have different dosages, and enter the body through different routes (2). This affects the amount of progestin that actually makes it into the bloodstream and up to the brain to stop ovulation.

Just because ovulation may occur on these methods doesn't mean that the birth control isn’t working. Progestin-only methods also work in other ways, such as thickening cervical mucus so that sperm are blocked from reaching the egg (22).

The implant and progesterone

The majority of etonogestrel contraceptive implant users do not ovulate. Among 16 etonogestrel implant users who were followed for up to three years, there was no ovulation detected until after 30 months of use, when two study participants showed increased progesterone levels indicative of ovulation (26). Ovulation may occur in a minority of people after long-term use of the implant as the levels of the medication in the body decrease over time (27).

Ovulation is common among people using the hormonal IUDs. In a small study of 10 people using the 52 mg levonorgestrel IUD, almost half of the cycles studied during the first year of use were ovulatory (28), but this number increases over time.

In a study of 14 people using the 52 mg levonorgestrel IUD for 6 years, ovulation occurred in 79% of the cycles even though nine of the study participants were not having regular periods (29). Regardless of whether they were having a period, the progesterone levels for these 14 people followed normal patterns of progesterone through the menstrual cycle, peaking on days 20-25, with max values in the typical range (29,18).

The shot and progesterone

The contraceptive injection or shot—which is a medication known as the depot medroxyprogesterone acetate (DMPA) injection—inhibits ovulation (22) and therefore suppresses ovarian progesterone production.

The average progesterone level for someone using the contraceptive injection is 0.40 ng/mL, (30). This level is similar to someone who is not on any form of hormonal contraception and is in the follicular (pre-ovulatory) phase of their cycle (18).

In a study of 43 people taking the mini-pill containing the progestin norethindrone, 60% had low progesterone levels without the typical peak, demonstrating either no ovulation or low progesterone production from the corpus luteum (31). The remaining 40% of people likely ovulated since they had a progesterone peak of at least 5 ng/mL for a minimum of 5 days, like people not on hormonal birth control (31). The likelihood of ovulation in this group was the same at 2 months and 6 months of use (32).

What else should I know about progesterone?

Progesterone and fertility awareness based methods

Basal body temperature (BBT) is one indicator people may track when using a fertility awareness based method (FAM) for contraception. Progesterone causes an increase in BBT of about 0.5ºF/0.3ºC to 1.0°F/0.6ºC (33,34). A sustained increase in BBT is a sign that ovulation has occurred.

Progesterone and the abortion pill

The "abortion pill" (mifepristone) is an anti-progesterone medication, meaning that it binds to the progesterone receptor, but doesn't activate it (35). This keeps progesterone from being able to exert its normal effect, which in the case of early pregnancy is to promote and support implantation of the embryo and to keep the uterus from contracting.

Mifepristone is used along with another medication called misoprostol to induce elective abortions in the first trimester (35), but also to treat early miscarriages (36).

Hormones are the messengers of the body, telling it how to breathe and grow.