Hormones are so much more interesting than what we’re taught in health class.  So we’ve created a guide to aaaall of the hormones. Here's everything you need to know about estrogen, progesterone, androgens, progestins, synthetic estrogen, and sex hormone binding globulin (SHBG).

First of all: what is estrogen?

You may have heard of the hormone estrogen before—it’s a pretty big deal.

Hormones are chemical messengers that facilitate communication between cells around your entire body. Think of estrogen as a key, and estrogen receptors as a lock—together they make certain body systems work. There are many different types of estrogen, and the word represents a whole family of similarly shaped molecular compounds.

Scientists have been able to harness and manufacture chemical hormones, including synthetic estrogens, that bind and influence estrogen receptors across the body, allowing us to alter and control aspects of our reproductive health.

Estrogens produced within your body are called endogenous estrogens, while estrogens that are administered as a medication are often called exogenous estrogen or synthetic estrogen (if it is pharmacologically made or altered).

Synthetic estrogens differ from endogenous estrogen slightly in chemical structure. These slight differences cause them to be absorbed, metabolized (broken down), and excreted differently by the body. They also activate estrogen receptors differently.

Estradiol is the body’s most active form of natural estrogen. This is the type of estrogen that drives the menstrual cycle, and binds the most strongly with estrogen receptors (1). 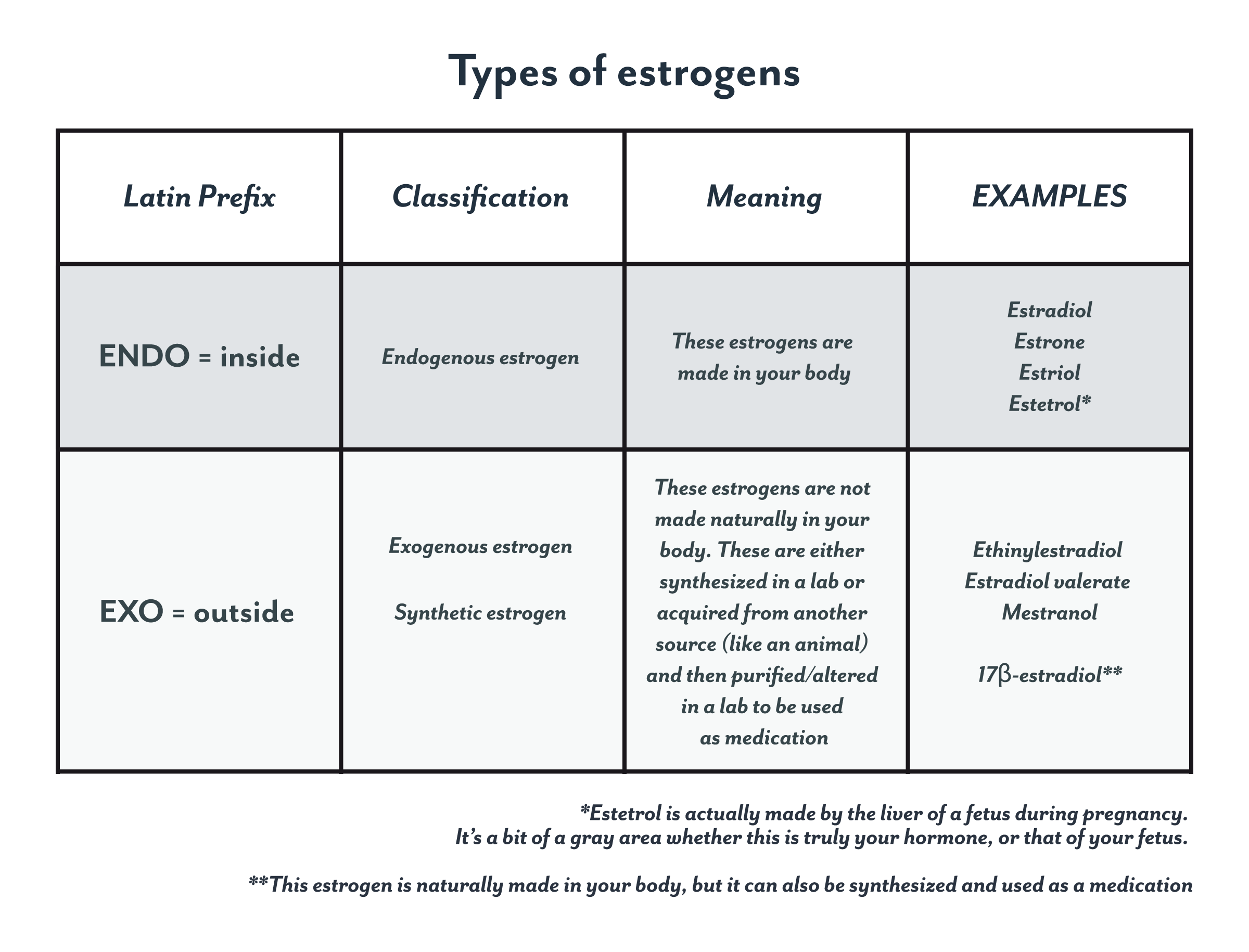 Why does synthetic estrogen cause side effects?

Side effects of synthetic estrogen

Since combined hormonal contraceptives are always given as a combination of both estrogen and progestin, it can be difficult to determine which component (and which relative dose and combination) is responsible for each side effect.

Combined hormonal contraceptives and synthetic estrogens can cause positive and negative side effects, including:

The side effects—both negative and positive—can depend on the amount of estrogen, the type of progestin, and individual level factors.

Synthetic estrogen in menopause and perimenopause therapies can cause the following side effects:

*People who have had a hysterectomy can be prescribed estrogen-only medications, since they can’t develop endometrial cancer (17).

What are the types of synthetic estrogen—and why should I know about them?

Synthetic estrogens are most commonly used in hormonal contraceptives and as part of hormone therapy for people during menopause to mitigate unwanted side effects.

Estrogens are used in combination with progestins, in combined hormonal contraceptives, like the pill, the patch, and the ring. But the hormone that prevents pregnancy is actually progestin—it does this by suppressing ovulation and inhibiting the secretion of stretchy, fertile mucus (19,20).

The purpose of estrogen in combined hormonal birth control is to make bleeding predictable (20). Progestin-only methods can cause changes in menstrual bleeding (3,21). So essentially, synthetic estrogens are added to these types of contraceptives to make your “withdrawal bleed” look more like a “normal period”.

In the United States, the most common type of synthetic estrogen used in combined hormonal contraceptives is ethinylestradiol (2).

When taken by mouth, ethinylestradiol is very bioavailable—this means that the medication can be absorbed into the body to more readily produce a desired effect. Less ethinylestradiol is needed than exogenous estradiol (also known as 17β-estradiol) to produce similar effects in the body (2,22).

This type of synthetic estrogen is newer on the market and only available in a handful of oral contraceptives.

Once estradiol valerate is taken by mouth, it is altered by enzymes in the gut. This process changes it into the “natural” form of estrogen, estradiol (23).

Formulas containing estradiol valerate are combined with a strong progestin and have only two days of placebo pills (24). People taking these contraceptives experience less menstrual blood loss than those who are not taking hormonal medication. For this reason, estradiol valerate may also be used to treat heavy menstrual bleeding (25,26).

Estradiol available in a medicinal format has the same hormonal structure as the estradiol found in your body. It is sometimes known by its more scientific name as 17β-estradiol.

Some companies and researchers are interested in developing birth control formulas that use this naturally occurring estrogen. One reason for developing these products is based on a theory that naturally occurring estrogen will produce fewer side effects, including decreasing blood clot risk (27). However, this has not yet been proven—further studies are still needed.

The main reason why estradiol is difficult to use in a contraceptive formula is that when taken orally, estradiol is not very bioavailable. This means that the body does absorb it particularly well.

One reason for this is that the majority of oral estradiol is broken down very quickly by the liver before it even reaches the bloodstream (2,28). Once it has been broken down it cannot have its intended effect.

That being said, some manufacturers are experimenting with doses and formulas that do work for contraception. In the past, multiple attempts have been made to create contraceptives with oral estradiol. They have failed—not because of their contraceptive abilities—but because of users’ low tolerance due to recurrent bleeding (23).

There are currently no 17β-estradiol containing hormonal contraceptives available in the United States, but there are a few formulations available in other countries (27).

Types of exogenous estrogens used for menopausal hormone therapy include:

Progestins are also sometimes used as part of menopausal hormone therapy, as a counterbalance for estrogens. Estrogens stimulate the endometrium (the lining of the uterus) to grow into a thick layer (1). Since this layer is usually shed during one’s period, the endometrium of those who have reached menopause and do not experience periods, can potentially be stimulated to grow continuously. By adding progestins into a formula, the endometrium is prevented from building up too much, which is a risk factor for endometrial cancer (17). If a person has already had a hysterectomy, meaning that they no longer have a uterus, then they can take estrogen therapy without progestins (18).

Progestins are synthetic forms of the body’s naturally-occurring hormone progesterone.

Which estrogen is in my particular birth control or medication?

The table below lists the possible types of synthetic estrogen that are available in each birth control in the U.S. Check the medically active ingredients on your birth control package to determine which type of estrogen you are taking. 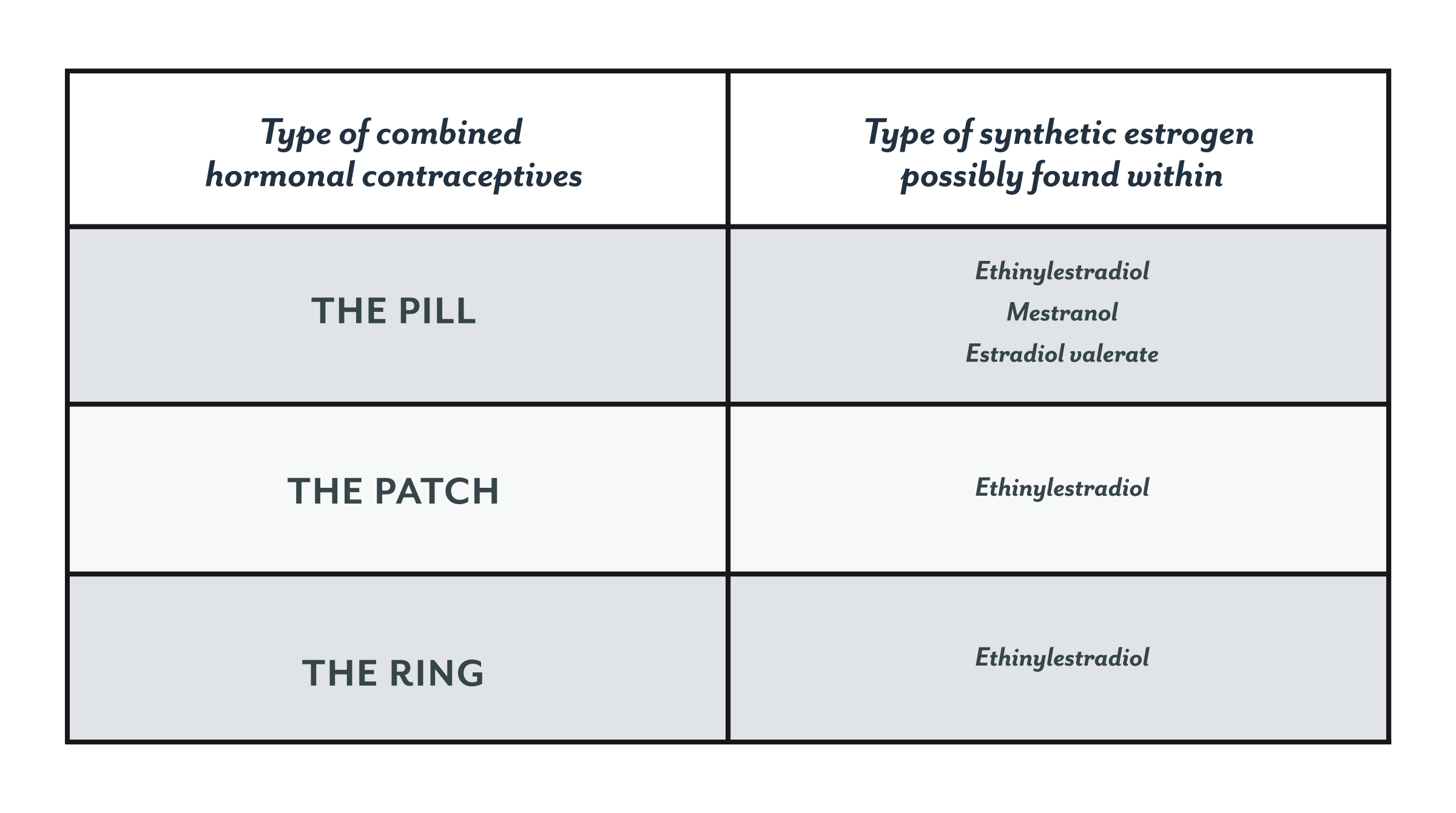 Choosing to use (or discontinue) hormonal contraceptives or menopause therapy, with or without synthetic estrogen, is an important and personal choice for every person. Talk to your healthcare provider to help decide what the best option is for you.

Every person is unique, with different goals and risk factors. Don’t be afraid to try another type of pill or another birth control method altogether if your first attempt leaves you unsatisfied.

Getting to know our hormones.