In 1960, the first hormonal contraceptive, Enovid, was approved by the FDA and came to be known simply as “the pill.” It was a breakthrough for women’s reproductive rights, and considered the first “lifestyle drug.” By the time of its 40th anniversary, the pill was used by over 200 million women worldwide (1).

Why use non-hormonal birth control?

People also report changes to mood, possible decreased libido, and increased risk of sexual pain problems when using the pill, though studies don't agree as to whether the pill increases these issues (4-7). These side effects have prompted some people to look for hormone-free alternatives.

We’ll go in-depth about all of your options, which include:

How effective is birth control?: The difference between using a method perfectly and typically

Outercourse is not only for teenagers — it has the potential to be hugely pleasurable to people of all ages and levels of experience.

How effective is outercourse at preventing pregnancy?

Not only does outercourse eliminate the risk of pregnancy and reduce the risk of STIs (if contact with bodily fluids is avoided)—it can also be more likely to lead to female orgasm than intercourse.

Condoms are among the oldest forms of birth control. Ancient Egyptians created sheaths to be worn over the penis. In the 16th century, linen sheaths were used to prevent syphilis. Condoms made of animal intestines became popular in the 18th century. Today, condoms come in a wide variety of styles, shapes, and colors (12).

How effective are external condoms at preventing pregnancy? 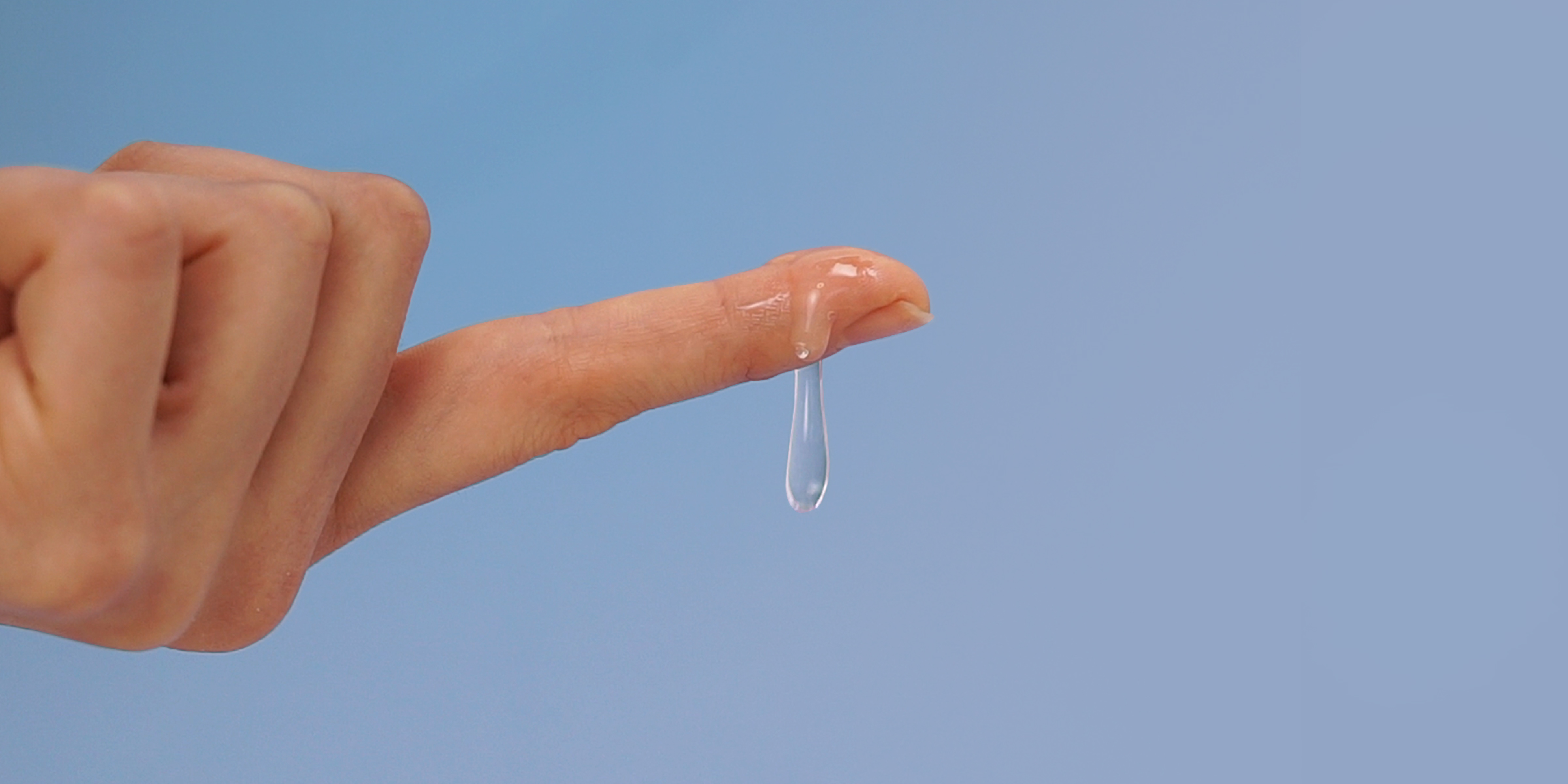 How to pick a lubricant 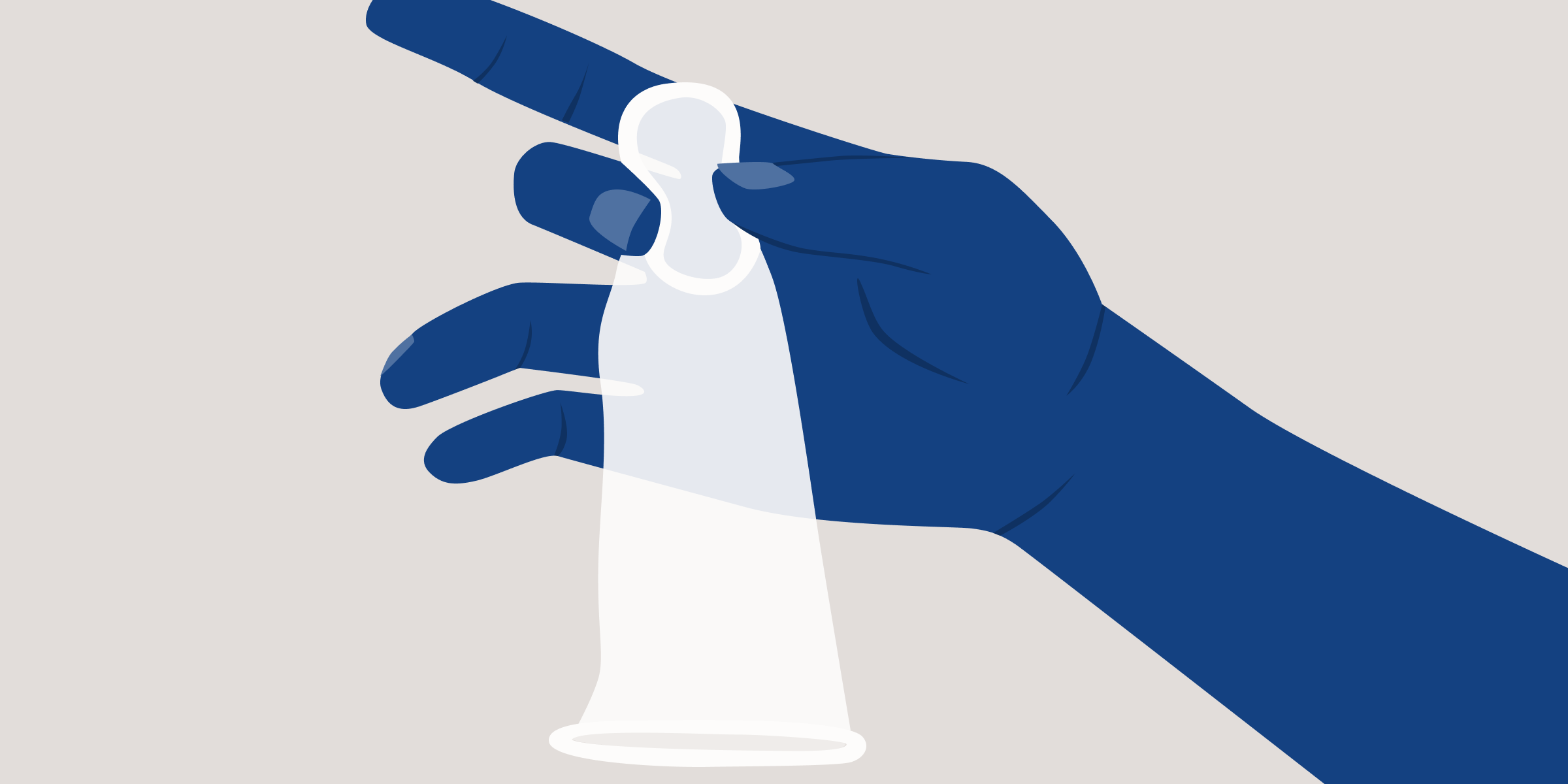 Are condoms effective? Are they always necessary? What is the correct way...

The internal or “female” condom is made of polyurethane or nitrile and placed inside the vagina or anus during intercourse. It comes equipped with a ring on either end of the condom to hold it in place and prevent it from getting sucked into the vagina.

Planned Parenthood has an excellent primer about how to use it.

How effective are internal condoms at preventing pregnancy?

The internal (female) condom is typically less effective than the external (male) condom. 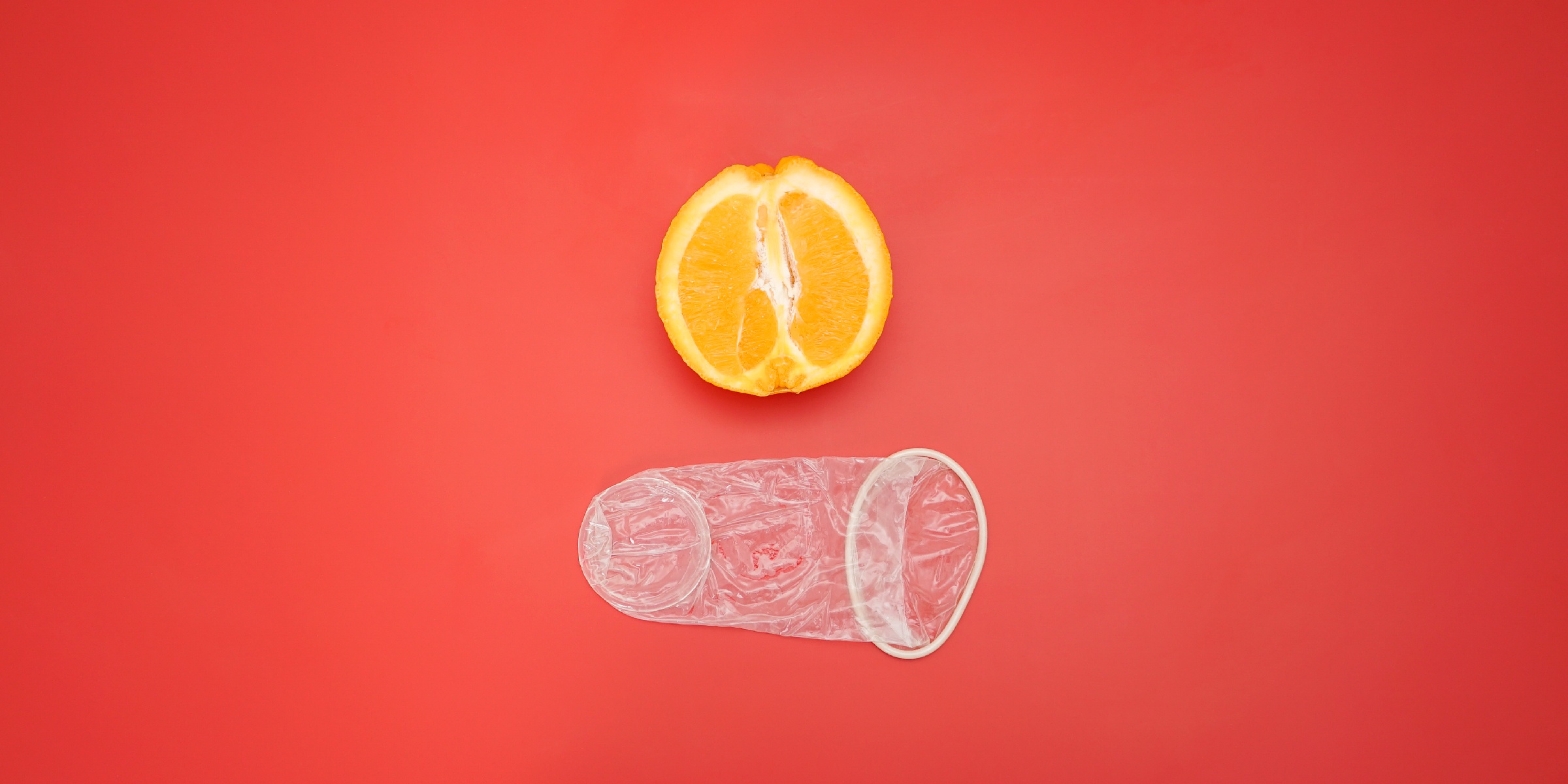 People may enjoy sex more with an internal condom because they feel...

by Clár McWeeney, and Nicole Telfer

Diaphragms and cervical caps are both placed over the cervix and used with spermicide. Neither device is available without a prescription. Before Caya, a single size diaphragm, diaphragms had to be fitted by a doctor (12).

How effective are diaphragms and cervical caps at preventing pregnancy?

With perfect use of the diaphragm (which includes the use of a spermicide),16 out of 100 women will become pregnant in a given year. With typical use, 17 out of 100 will experience an unwanted pregnancy (13).

The contraceptive sponge is filled with spermicide and placed in the vagina before intercourse. It must be left in place for 6 hours after sexual activity. The sponge is available over the counter, but is less effective than the diaphragm (12).

How effective is the contraceptive sponge at preventing pregnancy?

For people who have been pregnant for at least 22 weeks, the failure rate is 20 out of 100 women with perfect use. With typical use, 27 women out of 100 will experience an unwanted pregnancy (13).

These are often used in conjunction with condoms, the cervical cap, and/or the diaphragm.

How effective are contraceptive foams and suppositories at preventing pregnancy?

Fertility awareness based methods (FAMs) have suffered from a PR problem. Unfortunately, they are linked in people’s minds with the unreliable “cross-your-fingers-and-count” rhythm method.

What’s the difference between FAMs and the rhythm method?

One of the problems with the rhythm method is that it is based on a faulty theory that the menstrual period always follows a 28-day cycle, with ovulation occurring on day 14.

This has led to a lot of surprised parents and bouncing babies.

Many people with periods don’t have 28-day cycles. Cycles vary for a number of reasons (stress can be one factor). Also, ovulation doesn’t always occur at 14 days—this is especially true if a cycle is longer or shorter than 28 days (12,14).

It should be noted: if a menstruating person has a regular period between 16 and 32 days (which is 78% of menstrual cycles), calendar-based methods can be effective as birth control (12). 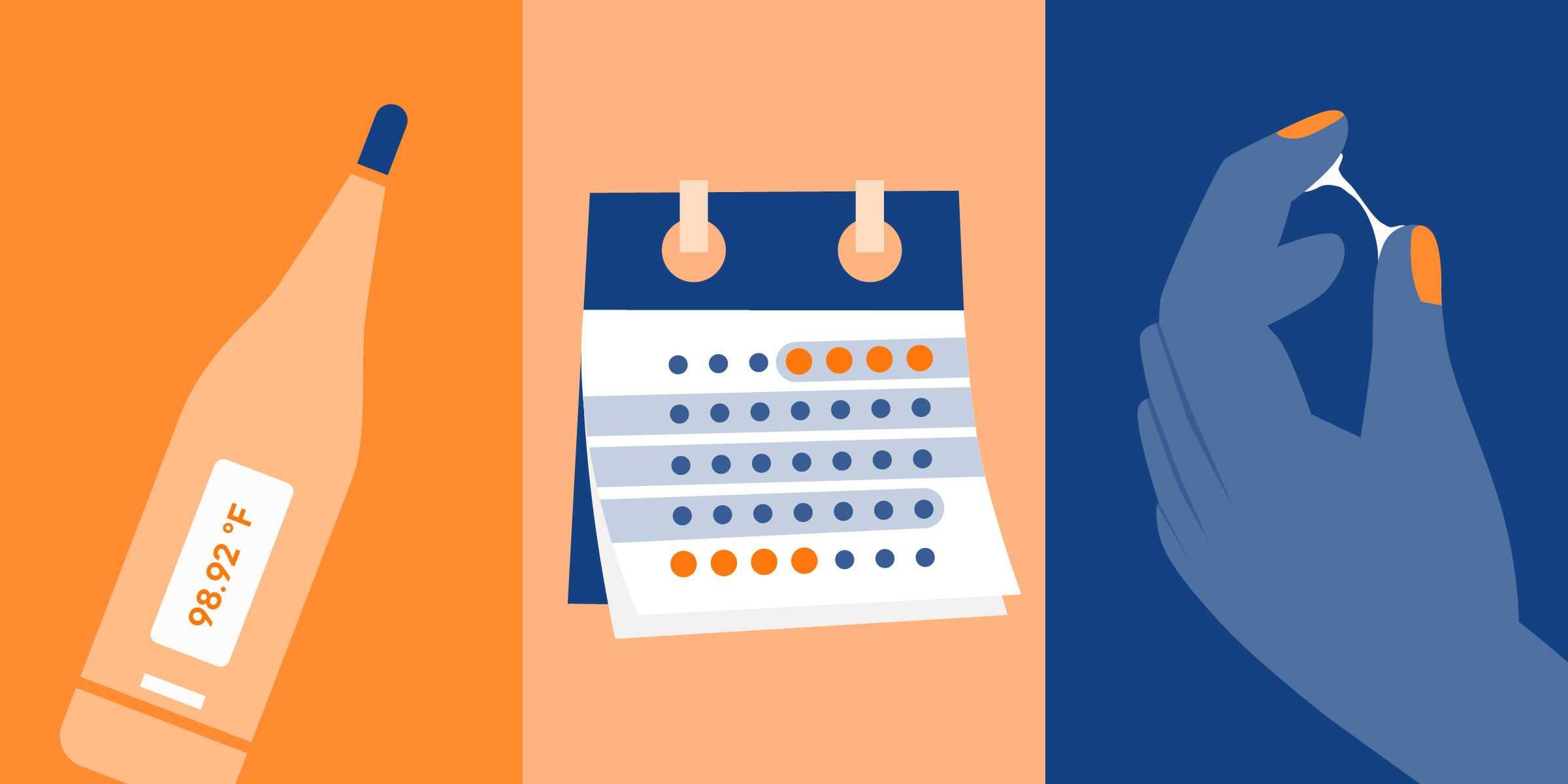 FAMs used in conjunction with other forms of contraception, such as condoms...

There are several FAMs, each with their own rules. They include:

There are also fertility apps that can help track your fertile window. Be sure to do your research: according to research in this area, many fertility apps aren't evidence-based, don't utilize FAMs, and aren't designed to be used as birth control (16).

How do FAMs work?

But to understand how all FAMs work, you’ll need to take a short detour to the basics of the menstrual cycle.

We have a guide to it here—take the time to make sure you understand what happens.

Before reading on: Make sure you know the phases of the cycle, what happens during ovulation, and the hormonal shifts that happen in each phase.

Most FAMs require you to observe and record one or more indicators of fertility and avoid unprotected sex during the fertile window (14).

These indicators can include:

Building up to ovulation, your cervical fluid becomes increasingly wet and lubricative. Around ovulation, this fluid takes on an egg-white consistency. These changes can be observed by wiping your vulva (vaginal area) with toilet paper (14).

Cervical fluid is usually less observable and drier during non-fertile days. Sperm can live in wet, fertile-quality cervical mucus for up to 5 days, but they die in a matter of hours in the dry non-fertile cervical fluid that is present when progesterone levels are high (14).

After ovulation, many notice an increase in basal body temperature, which can be best detected in the morning using a thermometer.

How effective are FAMs at preventing pregnancy?

The effectiveness of FAMs depends on the method.

Perfect use of FAMs ranges from less than 1 pregnancy per 100 women to 5 in 100. Typical use ranges from 2 pregnancies in 100 to 23 pregnancies in 100 (17). Success using a FAM depends on your diligence in keeping track of fertility indicators, and how willing you are to forgo intercourse or use a barrier method during the fertile window.

Should I use a fertility awareness method?

If any of the following applies to you, you are not a good candidate for FAMs:

You may want to consider other forms of birth control, as these life events can make it harder to read fertility signs (12).

The lactational amenorrhea method (LAM) is a non-hormonal birth control option for people who are exclusively breastfeeding an infant. This method relies on breastfeeding to prevent ovulation.

In order for LAM to be effective, you must feed your baby frequently and exclusively (no supplementing with formula or pumped milk) every 4 hours throughout the day and every 6 hours at night (12). The suction an infant applies to the breast is believed to prevent the usual production of gonadotropin-releasing hormone (GnRH), preventing the surge of luteinizing hormone (LH). Without the LH surge, ovulation doesn’t occur (27). The suction applied by a breast pump might not be reliable at preventing the LH surge. LAM can be used for 6 months after birth, or until your period returns, indicating you are ovulating (12).

How effective is the lactational amenorrhea method at preventing pregnancy?

With perfect use, fewer than 2 out of 100 people who use lactational amenorrhea will experience an unwanted pregnancy (25). There isn’t a good consensus on pregnancy rates for typical use of LAM, but one study of women who returned to work postpartum and were not able to breastfeed their infants on demand found the rate of unintended pregnancy using LAM escalated to around 5% (26).

Withdrawal (the “pull out” method)

This method is controversial, under-researched, and very common in certain parts of the world (18).

Withdrawal is often regarded as an extremely ineffective form of birth control. The research presents a more complex picture.

One of the primary concerns is whether pre-ejaculatory fluid (pre-cum) contains sperm. Some argue that any sperm present is due to a previous ejaculation, and that urinating prior to sex might enhance the effectiveness.

But, it might depend on each individual man's biology. In a study that examined the presence of sperm in 27 volunteers, it was found that 11 had sperm present in their pre-ejaculatory fluid. In 10 of these men, the sperm was motile (19).

Because there were several samples of precum collected from each volunteer, the researchers concluded: “It would appear from our study that some men repeatedly leak sperm in their pre-ejaculatory fluid while others do not.” (19).

All of the participants had urinated before sampling, so the results were not due to residual sperm from a prior ejaculation (19). 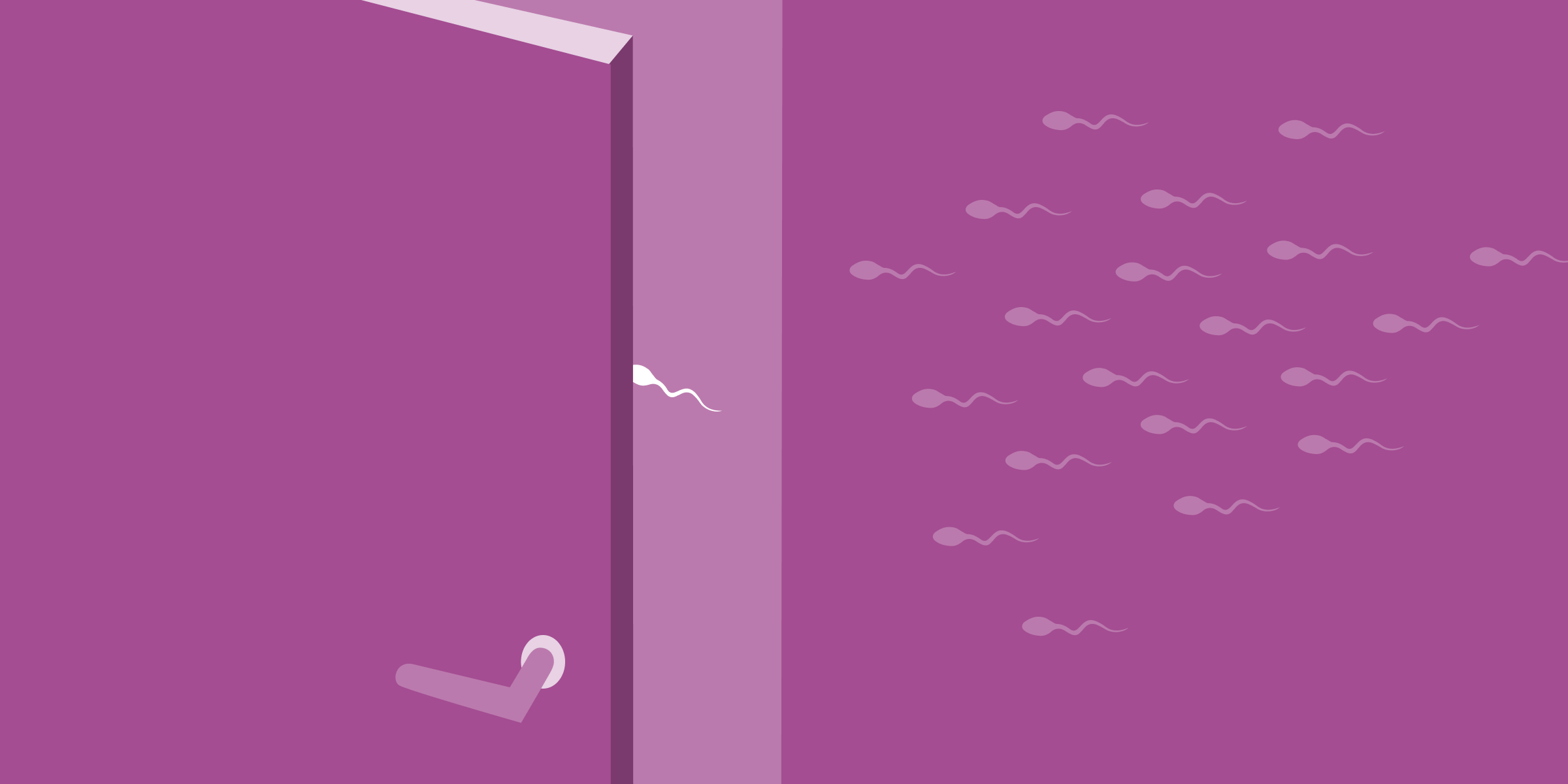 The copper IUD is hormone-free and approved for 10 years of use. The device has a thin copper wire wrapped around its plastic component, which releases copper ions. These ions generate an inflammatory response in the body, which then creates an inhospitable environment for sperm (20-21).

The copper IUD has these advantages:

And these potential disadvantages and side effects:

Many of these side effects decrease with time. But because of pain and bleeding, 15% of copper IUD users have the device taken out before the end of the first year (22).

Every body is different, and people have a huge variety of experiences...

The most popular method of contraception in the US is sterilization (3). This is a surgical procedure that eliminates the possibility of conception, in most cases.

Next to abstinence, it is the most effective way of preventing pregnancy (10). Sterilization is often chosen by men and women who have decided that they don’t want more (or in some cases any) children.

During a minilaparotomy procedure, the fallopian tubes are brought through a small incision in the abdomen and either cut, removed, or clipped (23).

A laparoscopy procedure uses a laparoscope to view the internal organs and to close off the fallopian tubes through cutting, clipping, or sealing with an electric current. Usually, it entails two small incisions. The recovery is usually quick, and there are fewer side effects that the minilaparotomy (24).

Sterilization is an extremely effective form of birth control, with fewer than 1 woman in 100 becoming pregnant in a year with both perfect and typical use (13). The risks include the rare possibility of an ectopic pregnancy if conception does occur (23). Female sterilization is immediately effective.

This form of sterilization involves clipping, cutting, or sealing off the vas deferens tube, which is involved in sperm transportation.

Within 2-4 months, sperm will not be present in a man’s ejaculate. Contraception will be needed for those months. Vasectomies are safer than female sterilization, with risks limited to bleeding and infection.

Vasectomies can be performed with or without surgical incisions, and like female sterilization, less than 1 woman in 100 will become pregnant in a year (13).

So there you have it folks—these are some of your options. There is no one perfect birth control method that fits everybody. The key is to learn about the different options and find the best match for you. This may change as your lifestyle changes and as you grow older.

If you are interested in hormonal birth control, you can find that info on helloclue.com too.

Most American and European women will use at least one form of hormonal contraceptive.