The makeup of your vaginal ecosystem is in constant flux. It changes with the phases of your reproductive life (puberty, menarche, pregnancy, menopause) as well as with your hormonal cycle (1, 2). But your vaginal flora works continually to maintain a level of homeostasis, protecting and facilitating fertility before and during your reproductive years, and helping to keep your body healthy your entire life.

The dominant type of bacteria populating the typical healthy vagina is Lactobacillus, making up over ~70% of vaginal bacteria (3, 4). In the reproductive years, there may be as many as 10 million of these bacteria in every gram of vaginal fluid at certain points in the menstrual cycle (2). Lactobacilli come in many species, and are also found in your digestive and urinary systems (as well as in yogurt, which is why you may recognize the word.) These (and other) bacteria produce hydrogen peroxide and lactic acid as products of their digestion, which help to maintain the low pH of a healthy vagina (ie. a slightly acidic environment) and prevent populations of other microbes from growing or over-growing (a minority of vaginas have a variety of other dominant lactic acid-producing bacteria) (5).

The balance of bacteria in your vagina is important in keeping you, and your reproductive tract, healthy.

What is Bacterial Vaginosis (BV)?

It’s common not to have heard about bacterial vaginosis (BV) until you notice an issue with your own fluid and start googling. BV happens when the normal balance of vaginal bacteria is replaced by high numbers of anaerobic bacteria (bacteria that don’t need oxygen to grow). The most common type of BV-causing bacteria is called Gardnerella (don’t confuse it with the STI gonorrhea if you see it on your clinical report). The digestion processes of the new bacterial community create different byproducts and environmental changes, which can lead to symptoms from a fishy or unpleasant odor to itching, discomfort and inflammation (6). An immune response is also triggered in the vagina and can degrade the vagina’s naturally protective mucus. This can make the reproductive tract more prone to sexually transmitted infections (STIs) like HIV and chlamydia (7).

Bacterial vaginosis is the most common cause of abnormal discharge and odor in people who seek care.

In many cases, the most significant impacts of symptomatic BV are emotional and social. This is especially true for people whose BV is recurrent (having it multiple times, despite treatment). One study found that, depending on the severity and frequency of symptoms, BV can lead people to feel “…embarrassed, ashamed, “dirty” and very concerned others may detect their malodor and abnormal discharge” (8). It can affect a person’s self-esteem and sex life, and they may avoid sexual activity (especially receptive oral sex) altogether. Recurrent symptoms, without an understanding of the reason, can be frustrating and make someone feel out of control. 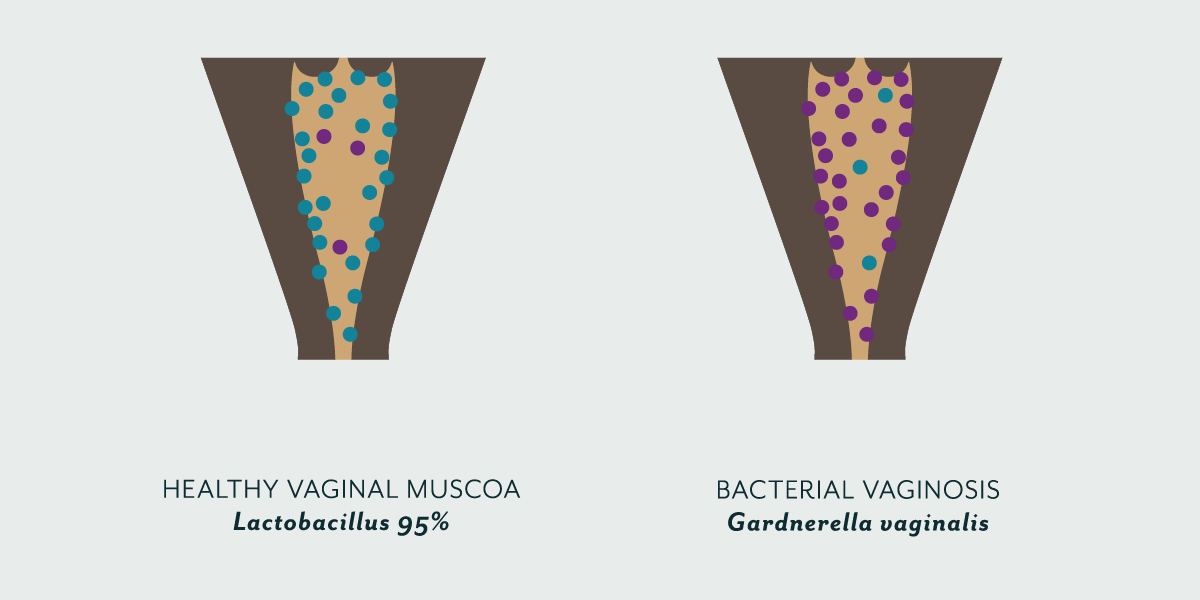 BV happens when the normal balance of bacteria is replaced by high numbers of anaerobic bacteria.

How common is BV?

In the US, BV is the most common cause of abnormal discharge and odor in people who seek care. Research has found about 3 in 10 people in the US have BV at any given time (~2 in 5 Caucasians, ~3 in 10 Mexican Americans, ~5 in 10 African Americans), though many of those cases were asymptomatic (~84% had no vaginal symptoms) (9). The prevalence of BV varies widely amongst demographics, and is tied to sociodemographic characteristics including race, ethnicity, education and income (9, 11).

What are the causes?

The exact causes of bacterial vaginosis are still unclear. Vaginal homeostasis can be disrupted by both internal factors (ex. antibiotics, diet) and external factors (ex. soap, semen), but it isn’t fully understood why one person gets recurrent BV in a particular situation when another doesn’t. There are some factors that have been shown to increase the risk; for example, people who’ve douched in the previous six months are significantly more likely to have BV (9). Prolonged or irregular uterine bleeding may also be a contributor. This may happen because uterine blood changes the pH of the vagina to be slightly less acidic (there are fewer Lactobacillus around the time of menstruation) and/or because red blood cells provide more opportunity for lactobacilli to be carried out of the vagina (2, 11). People who have prolonged bleeding as a side effect of a new IUD, for example, may be more likely to have BV, but more research is needed (11). Recurrent BV may pop up around the time of menstruation for the same reason (11). The use of hormonal contraceptives in general, including “the pill”, has been shown to have a protective effect against BV (9, 11, 12).

Recurrent episodes of BV may tend to appear around the time of menstruation.

Vaginal bacteria can sometimes get out of balance and then improve on its own. To prevent BV, start by limiting your risk factors. Use condoms, don’t douche and keep all soap away from your vulva and vagina (some experts say non-foaming unscented soap is okay on the vulva, and others say stick to water). Don’t use any products with scents or perfumes in that area, and limit your bubble baths.

Often though, symptoms will persist or recur and need to be treated. Finding the source of the issue would be most helpful, but this is often difficult when so little is known about the causes of BV.

Treatment of BV can range from antibiotics and antiseptics, to medications to restore acidity, to probiotics (find an in-depth discussion on current treatment here). Some treatments are available over the counter, but others will need a prescription. Tracking your symptoms, especially when they begin may help you and your healthcare provider identify triggers (use the ‘atypical fluid’ selection, or make a specific tag).

Unfortunately, it’s common for BV to return after treatment. The lack of understanding of what causes BV means treatments still have a long way to go to be effective in the long term. The FDA estimates the post-treatment “cure rate” is under 4 in 10, with between 3 and 8 people having recurrence within several months (16–18). Limiting risk factors after treatment can help—talk to your healthcare provider about options.

Lastly, if you’re up to it, talk about BV with your partners and friends. The lack of awareness around it is staggering considering just how common it is. Bringing knowledge of BV into public awareness helps prevent the stress that can come with having it.

Know your discharge, keep your vagina healthy and, track any changes in Clue.