I've always been bisexual. Even though like many people I was socialized as a heterosexual and feminine person, my first "sexual awakenings" (those first experiencies of admiration, infatuation and sexual excitation) during my childhood happened with women. As I was at the same time conscious about my attraction to boys, my heterosexual socialization made me give little importance to my fascination with women and the feminine.

After several years—and more unperceived "awakenings"—I noticed that maybe I'd be interested in "being" with a woman. At first I didn't try anything, and when I had non-straight crushes I felt intimidated and very buga* for them. When I had boyfriends, they noticed that I also liked women, but we never talked about it in a straightforward manner. Eventually my first non-buga relationships (sexual, sentimental) happened, with both cisgender women and people outside the binary gender spectrum. Only after I had those experiences I told myself that–finally–I could call myself bisexual.

(*Buga is a jargon used by LGBTQIA communities in Mexico to refer to heterosexual people.)

Nowadays I'm suspicious of talking about my bisexuality with other people, since unfortunately biphobia (the hate and discrimination toward bisexual people) is a real phenomenon (1). Because the bisexual identities are a grayscale in contrast to the "black or white" which implies being straight or homosexual, bisexual people can suffer discrimination, prejudice or invisibility from both of these communities.

Biphobia can be manifested through unintended jokes and lack of credibility, or openly as insults. These type of attitudes negatively affect the mental and emotional well-being of bisexual people, especially among younger bisexuals who report more mental issues (anxiety, depression, stress, higher rates of suicide) than both heterosexuals and homosexuals (gays and lesbians) (2).

In many cases, biphobia is a product of a lack of information. Below you can read more about some of the most common questions, myths, and facts about bisexuality.

What exactly is bisexuality?

The bisexual orientation is defined as having attraction towards more than one gender (3); it is a more fluid and open idea, subject to variations between different people who call themselves bisexual.

Not all people define their bisexuality in an identical way, and not all people attracted towards more than one gender call themselves bisexual.

Is bisexuality only a phase?

No. It's normal that many homosexual people go through a exploration period while they are learning to understand where their attraction lies. However, that doesn't mean bisexuality is always a phase prior to homosexuality (2). For many people, feeling attracted to other people of various genders is a serious and stable preference (2).

Being bisexual does not always mean that an attraction towards more than one gender is divided 50-50 evenly, or even 40-60, in a consistent preference. There are some for whom it is mostly–but not exclusively–attraction to one gender (3). But there are also those for whom attraction changes with time and according to certain contexts (2). This category of fluidity is not expected–at least in the beginning–from monosexual orientations.

These types of false beliefs have been facilitated by scientific research. Many studies on bisexuality have been focused on monosexual perspectives (heterosexual and/or homosexual), skewing the results to misrepresent the experience of bisexual people (2). It has also been wrongly suggested that bisexuality is an incomplete orientation, as if it was only a mere transition to homosexuality (4).

Do bisexual people like it "both ways" because they have an insatiable sexual appetite?

No. Someone’s orientation does not define anyone's sexual appetite. Bisexuality itself doesn't make someone promiscuous, unfaithful or untrustworthy. This myth is a product of monosexism: the belief that people should have only one sole sexual identity and only one type of sexual behaviour towards one gender or defined sex (1).

Monosexism also assumes monogamy is the norm (1). To impose monosexism as a sole social norm applicable to everyone leads (consciously or indirectly) to the belief that another more fluid sexuality can be a threat or an anomaly, and harder to control.

In my experience, it’s been very irritating when people assume that being bisexual translates to the equal possibility of being willing to "do it all".

Am I bisexual if I also feel attraction towards transgender or non-binary people?

Generally speaking, yes. Some people think that the prefix "bi" means that bisexuality is the attraction towards only two cis/binary genders ("man" or "woman"). There are indeed those who live their orientation this way, but bisexuality–understood as the attraction to people of more than one gender–can also be extended to people with gender identities way beyond the binary and cis gender spectrum.

With that in mind, it’s also worth noting that not all people who feel attraction to more than one gender call themselves bisexuals for many reasons (stigma, culture, lack of information available, etc.). There are non-monosexual orientations, for example pansexuality (the attraction to people without considering their gender identity), whose definitions can sound very similar to bisexuality (3); in those cases, the decision to call oneself bisexual, pansexual or of any other term is a much more personal question that depends on how we feel and how we define ourselves individually. 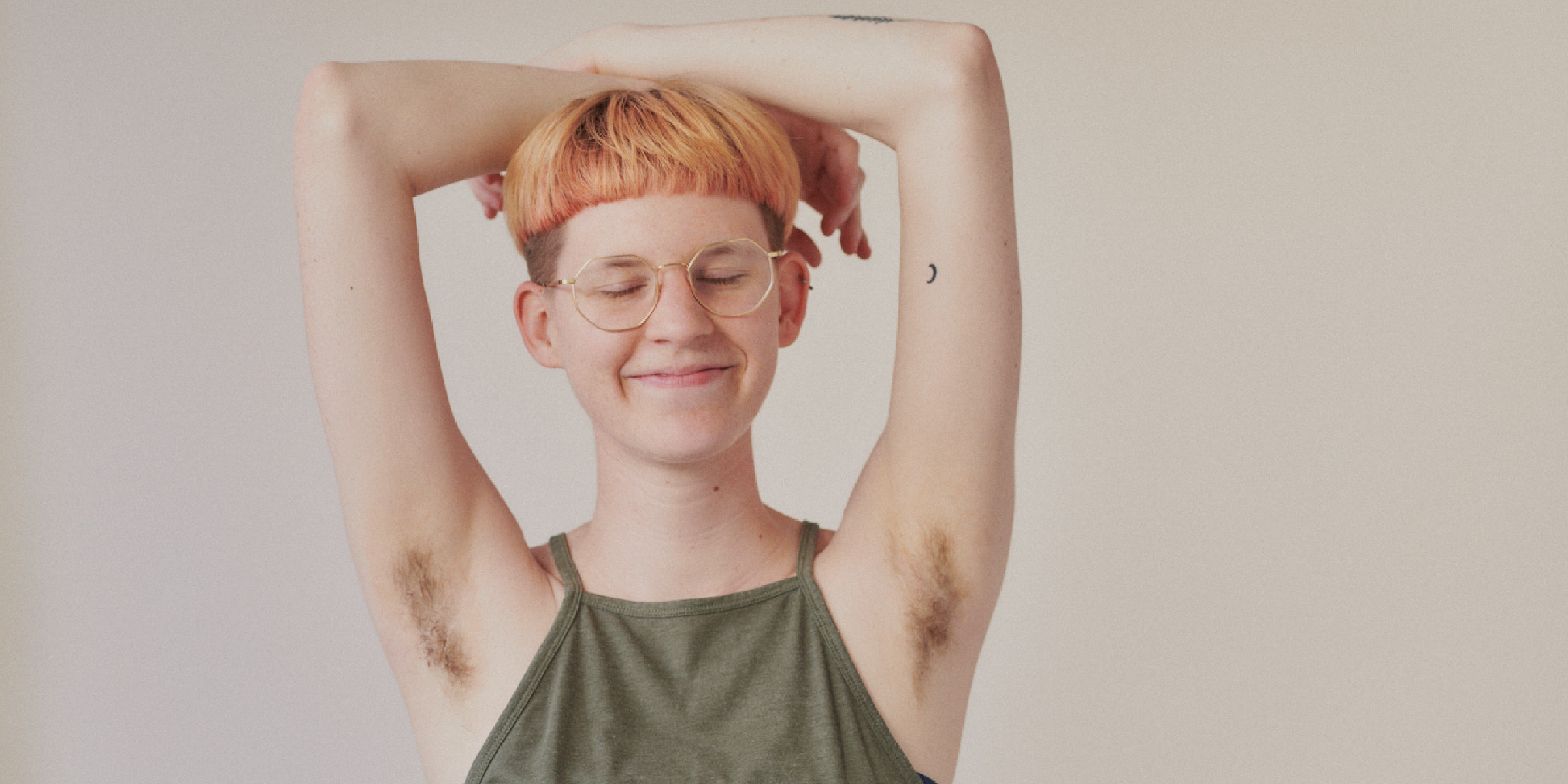 How tracking in Clue helped me accept my non-binary identity

Through tracking, I began to see my period and symptoms not as...

Do I stop being bisexual if I start a romantic relationship with someone of the "opposite" gender?

No. This myth is due to the false idea that bisexuality is only an "experimentation" phase before things "get serious" and back to a stable heterosexual relationship (a common case among people socialized as women) (5). It is also possible to be in a monosexual relationship in which each person keeps their distinct sexual orientation.

There are internalized feelings of biphobia common to bisexual people when they decide to start a romantic relationship that can be perceived as monosexual. These feelings often occur similarly to the fear that a partner of monosexual orientation wouldn't understand the bisexuality of the other (2). In other cases, it might be easy for others (family, friends, social circles) to assume that the bisexual people's orientation changes or disappears depending on the current partner (1).

Even though the sexual orientation of anyone can change throughout life, it's much healthier when those decisions are made individually, without biphobic stereotypes and without the pressure of others’ perceptions.

Can I be bisexual if I haven't had sex or a relationship outside the heterosexual spectrum?

Non-heterosexual experiences, either sexual, affective or social, often times are facilitated (or repressed) by the context in which we live, by our social or familiar relationships, by the complexity of our tastes and individual necessities, by the access (or lack thereof) to different sexual diversities and cultures, and also by a safe environment, free from harassment, judgment, and marginalization.

It's important to keep in mind that there aren’t always comfortable and safe environments for the open exploration of any non-heterosexual orientation; sometimes there are circumstances in which prioritizing one’s physical and emotional well-being requires keeping oneself in the closet—which is also valid. In any case, whatever the context, not having non-heterosexual experiences with others does not mean that someone’s internal thoughts should be suppressed. I fell into this trap and only called myself bisexual once I had my first non-heterosexual experiences, even though my whole life I have been thinking that.

Clarifying doubts and obtaining sexual information free of bias and stigma can make a critical difference in the quality of life of those marginalized by their sexuality.

Use Clue to track your sexual life, no matter your orientation.

Birth control is generally marketed and designed for heterosexuals, but they’re not the only ones using it.