People have sex for pleasure, reproduction, or both. Pregnancy happens when an egg and sperm successfully meet through intercourse or in vitro fertilization. But let’s get down to the basics—what exactly are eggs and sperm? What do they look like, and how many do we all have?

The first thing to know: both eggs and sperm are gametes.

A gamete is a sex cell that contains half of the genetic material (haploid) as a normal body cell. So in humans, instead of having 23 pairs of chromosomes, a gamete only contains 23 singular unpaired chromosomes. The roots of your DNA!

Every single gamete is genetically unique, because chromosomes are mixed and distributed in a new way every time a gamete is formed. This process is called meiosis.

These gametes contain a unique copy of half the genes of the parent source. When fertilization occurs, an egg fuses and combines genetic material with a sperm to create a full set of chromosomal DNA, with 23 pairs of chromosomes. This is the blueprint for a whole new unique person.

Now, where do eggs and sperm come from, and how do they develop?

How many eggs do I have?

Egg cells  are among the largest cells in the body—each egg is 0.1mm, which seems quite small, but it’s actually visible to the naked eye (1).

You’re born with all the eggs that will be released in your reproductive lifetime, averaging around 590,000 inactive eggs (2).

These immature reproductive cells are called oocytes and are formed within your ovaries when you’re a fetus in the womb (2-4). Maturation of eggs occurs during puberty, as you begin your menstrual cycle. At that point, your ovaries can develop and release a mature egg, an ovum, through a process each month called ovulation. Each egg that is released is capable of being fertilized by sperm in the fallopian tube. If it’s not fertilized within 24 hours of being released from the ovary, it is no longer viable, and is shed in your period.

Your egg count starts decreasing as soon as they’re created—while you’re still in the womb (1,4). 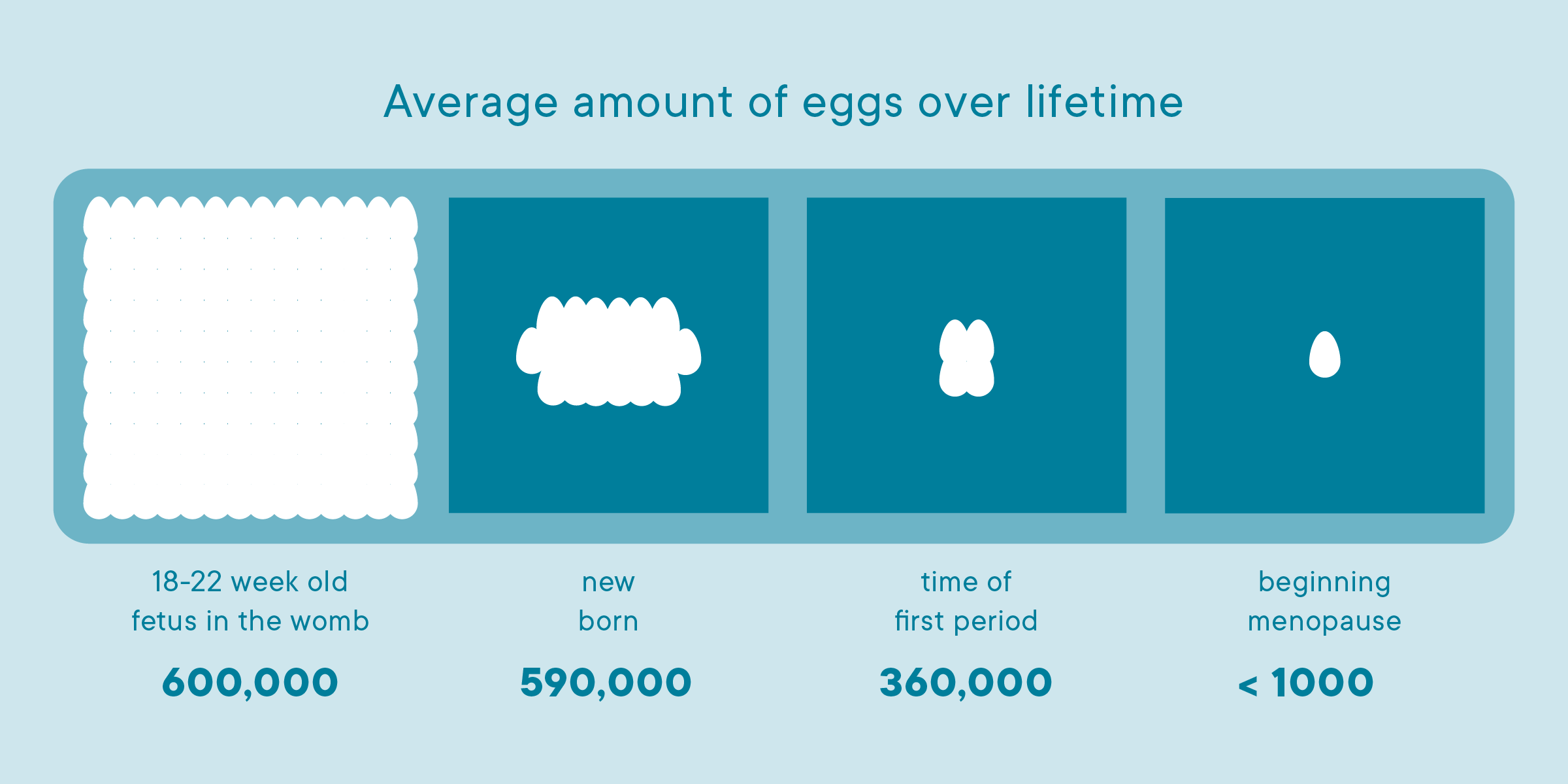 Many different studies have found different ranges of egg population throughout a person’s lifespan, ranging from a couple million eggs being present at birth to only in the tens of thousands (2). For this reason, we’re highlighting just an estimated average of eggs available based on data from different studies and researchers—every person will be different.

Where are all these eggs vanishing to?

Every egg within your ovaries is enclosed within an ovarian follicle, which is a sac of cells that surround each egg. These follicle cells help to prepare an egg for ovulation and conception, by responding to and producing hormones. By the time you begin menstruation, your follicle count will average around 200,000 (1,2).

Only around 500 follicles will release an egg in your reproductive lifetime (1).

Every month, one lucky egg fully develops and is sent out for potential fertilization, but the others that are not selected for ovulation will undergo programmed cell death (follicular atresia) and be reabsorbed—about 400 to 500 expired eggs per month (1).

Unlike the egg, sperm are among the smallest cells in the male body. Sperm is meticulously, and continuously, created for the intent of fertilizing an egg (3).

A single sperm looks like a tadpole and consists of a head, neck, midpiece, and tail and is 40 to 250μm long—that unit of measurement is micrometers, AKA super small (1).

At the onset of puberty, immature reproductive cells called spermatogonia go through the process of spermatogenesis, where they begin to multiply quickly and continue to divide and divide to eventually develop mature sperm, spermatozoa (3).

On average, only a few of the billions of sperm released during the reproductive life of a human male will have the chance to fertilize an egg (3). Tough competition.

How long do sperm live?

Starting at puberty, sperm are constantly being produced in the testes at a very fast rate—up to 1000 sperm per second (1)—that’s a lot of sperm!

But this process isn’t instant. It takes several weeks for new sperm to become fully moveable and mature in the testes (1,3).

Once the sperm are made, they are moved out of the seminal vesicles and into the epididymis, a long tightly packed coiled tube that sits on top of and along the side of the testes. Sperm are stored in the epididymis, and continue to mature, gain the ability to swim, and wait here until ejaculation (1).

After ejaculation, sperm can fertilize an egg for up to five days, though the chances of pregnancy from “old” sperm is much less frequent (7). Another study found live, moving sperm after five days in human cervical mucus stored in a lab (8).

These studies show that once ejaculated, sperm can survive and be functional up to five days in the reproductive tract.   They won’t stay alive that long on your bedsheets.

How many sperm are in a single ejaculate?

Unlike eggs, sperm are constantly being produced throughout someone’s reproductive life. The number of sperm in a single ejaculate ranges from 40 million to 500 million—the average is about 182 million (1). For every ovum ovulated, about 1 billion sperm are produced (1).

However, most ejaculated sperm are either dead or incapable of fertilizing (1).

Research shows that increasing age is associated with decreasing sperm quality. Sperm quality includes its motility (ability to reach an egg), structure, and semen volume (10). Sperm number and concentration per ejaculate varies individually, with some people having a low sperm count or absence of sperm (1). When it comes to age and effectiveness, the American Fertility Society recommends an age limit of 50 for semen donors (11).

Ovaries, testes, and beyond

Some people are born with ambiguous reproductive organs, and/or sex characteristics of both male and female bodies. This is commonly known as being intersex. There have been no documented cases where one person has both functional ovaries and testes.

Fertility for all genders is a combination of many factors, including age, diet, genetics, substance use, stress levels, illness, and environmental factors (1).

Both people with testes and people with ovaries have a lot of sperm and eggs, but only a tiny number of these cells are ever used when it comes to forming another human.